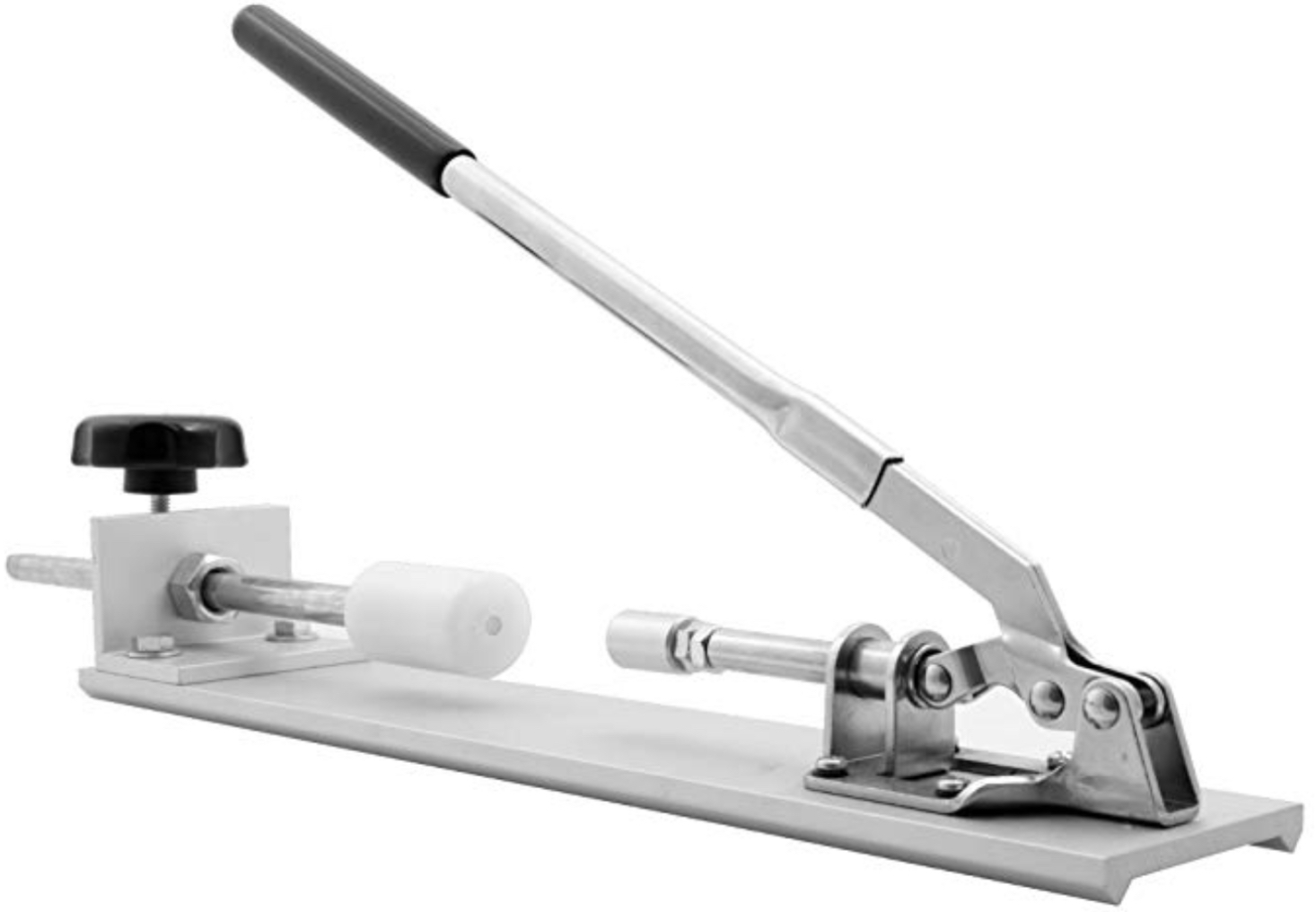 I do not get any commission from any links on my site, not even from Amazon. I am just sharing things I’ve found effective and helpful.

I assume you have basic polymer clay supplies: clay, blades, rollers or pasta machines, etc. If not, here are two great guides to beginner basic supplies for the clay portion:

If you’re interested in some optional equipment that makes it easier to make quality pen, take a look at my article on quality of life equipment upgrades for pen making.

Options for the pen hardware

The most basic thing to do is cover a bic pen. They’re fun, easy, cheap, and a good way to decide if you like working at such a small scale. All you need is a pen that won’t melt in the oven. You can try any pen that’s cheap and easy for you to get. Bic Clic Stic, Bic Soft Feel Retractable, and Bic Round Stic are all pens I have heard will work, though it’s always worth double-checking yourself in case the manufacturer changed the formula. (And at least in the US, you can often get these locally at an office supply shop as they are a common brand.)

Be sure to remove the ink from the barrel before baking.

The way most people make them (applying clay around the existing barrel) means the pen cap will no longer fit on if you are using the Bic Round Stic.

You can manufacture a new barrel yourself out of copper sheets, but it will have many of the same challenges of being a small diameter that the slimline pen kit has.

You can also make a cap, though I was never successful in making one with enough tolerance to actually stay on, so they were more “sitting on my desk” pens than anything else.

Most of the tutorials you’ll find online for polymer clay pens are for covering this type of pen.

Use a no-press pen kit

If you like the idea of a more traditional looking pen but don’t want to mess around with pressing a pen together, you can use a no press pen kit. I found them to be not as sturdy as the regular pen kits, but that may have been my error or the specific kit I bought.

I haven’t tried these personally, but Michelle Dorn Hoffner suggested them as an in between alternative, since you do need to use a press or vice to re-assemble, but they’re much cheaper if you mess them up than a metal pen kit.

They have the advantage over the basic bics listed above of being retractable, so you don’t need to worry about a pen cap. Here’s a link, but they’re purchaseable many places: BIC 8373971 Soft Feel Retractable Ballpoint Pen, Medium Point, Black, 12-Count

Use a regular pen kit

You can find these on amazon or from any one of many pen kit suppliers — just search Google for pen kits.

Be aware that while Slimline pens often appear like a good beginner pen, the bushings (i.e. the height of the pen hardware itself, that you want your clay to be exactly as tall as) aren’t much taller than the brass barrel itself, making them hard to use because your clay (e.g. your cane slices) needs to be much thinner.

Specifically, a slimline pen has room for about four playing cards of clay before you’re exceeding the bushings. (Not familiar with the playing card method of measuring clay height? Read about it here. 10 cards should equal approximately 2.5-3mm.)

For my Atlas, for example, where 0 is my thickest setting and 9 is the thinnest, four playing cards translates to 5 thickness being a tad too high over the bushings and 6 being a tad low. I usually pick a 5 and sand back down. You can do a similar measurement with your own pasta machine to figure out what thicknesses are appropriate for your machine (all are different, even if they’re the same brand and same model, since they are not precision machines.)

That said, if you don’t care about having your first few pen barrels flush with the hardware (I didn’t!), then slimlines are great because they are cheap and plentiful and a good way to see if this is something you enjoy doing.

Options for assembling the pen

You can also use a bench vice — it will need to be one that can go as wide as your widest piece you need to press, which could be several inches. While woodworkers often already have a vice in their shop, polymer clay artists are less likely to. And once you start looking at 4-5” vices, they don’t seem to be much cheaper than $30-$40 (though you may be able to get one used somewhere.) They also have the disadvantage that it’s harder to keep the pen fully in alignment — and if you don’t, you could bend the hardware and ruin the kit or even your barrel.

The best answer is a real pen press — and there’s one for sale on Amazon right now that is $38, which is very competitive with vice prices (and there’s one at Penn State for $50.) You may be able to find one cheaper somewhere else as well.

An alternative is the Assembly/Disassembly Pen Press from Penn State, which is the the one I have and can personally vouch for it working very well.

Options for making the barrel

This will result in a pen that’s probably not flush with the hardware — but that may not matter to you.

It’s how I did my first few pens and plenty of people happily make their pens that way.

Use a home-made mandrel

Any 1/4-20 threaded rod (or M6 in metric) will work, but so will a knitting needle if you have a ~6-7mm needle (sizes 2-4 UK, or 10-10.5 US). If your needle is on the smaller end of that range, you will want to use masking tape to thicken it a bit, or use rubber bands or a similar solution to hold the tube in place.

You can also buy 7mm smooth rods, which work great and are a bit easier to slide the unbaked barrels back and forth on.

I prefer having something that is 1/4” or 7mm (M6) exactly and then put my bushings on also: this makes it much easier to get my pen barrel to the right height even if I’m not using a drill to sand it down and will be doing it by hand.

Penn State sells a nice PolyClay Mandrel that works great either by hand, or if you’re attaching it to your drill or lathe.

Alternatively, you can use a threaded rod, but I found a 6” one (the largest my local hardware store had) to be too short to comfortably do two pen barrels so I’m happy with my mandrel purchase and I use my threaded rods for baking instead. But a longer one would work just fine (or do only one barrel on your drill at once.)

Options for baking the barrel

If you have the mandrel from Penn State, it’s designed with flat bottoms on the two large nuts on the ends so it won’t roll, and you can bake your barrels right on that.

You can use any bead rack you have or have made.

Or, I made little ‘feet’ out of polymer clay for my smooth rods as you can see in the image to the left here. The bottom is four layers of the thickest setting on my pasta machine, and the top is a single layer to hold the rod in place.

I made eight of them so I can use them to hold or bake multiple sets at once.

I like using spare slimline bushings to protect the end of the barrels so they don’t bump up into sharp edges on the feet before baking.

Options for finishing the barrel

I have several articles on hardware options for finishing the barrels, so I won’t repeat that here:

If you are finishing by hand, any sandpaper, polishing papers, and buffing method you’re used to using is sufficient.

If you are finishing with a drill or lathe, you can use your existing sandpaper and polishing papers, or you can look into abranet or sanding tape (I use both and find them very effective with the drill doing the work.)

You can also consider using CA glue (see my Making Pens page to see all my posts on using CA glue), but it’s a bigger investment than just normal sanding and buffing.

If you have a drill or lathe, consider Novus 1 Plastic Clean and Shine for your final buffing/polishing step. If not, any buffing wheels are a good choice, though these wool buffing wheels are the absolute best I’ve ever used and I don’t use anything else at this point.

The IAP (International Association of Penturners) has a very nice database of bushings and barrels and instructions that you can view online or email and print.

They also have a cheap app version of it for iOS and Android.

If you’re interested in some optional equipment that makes it easier to make quality pen, take a look at my article on quality of life equipment upgrades for pen making.