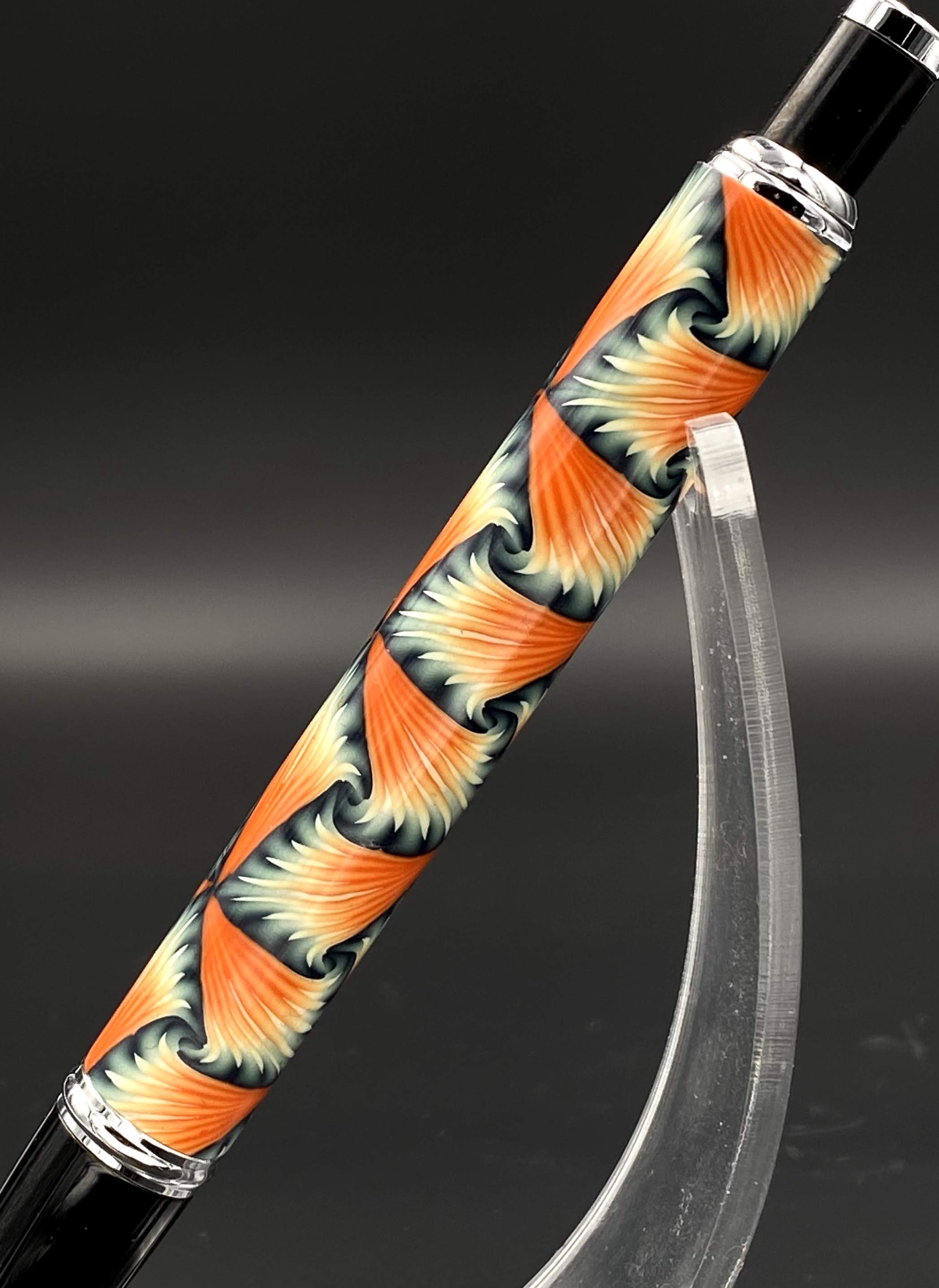 I am now making video tutorials also: my channel is at https://www.youtube.com/channel/UCbut4v30Fv–I_qF3GHmsKw/

Video version of this written tutorial:

This tutorial shows two different ways to arrange the colors in this cane to create two different looks. Below, in the third picture, I also include a third option where you combine both canes alternating to create an additional arrangement.

I really love the “paradox cane” for fun visuals. The first time I saw it, it was a set of rough pictures from Vivid Clay with a bit of explanation: here’s her tutorial from January 2018. The first full tutorial I saw was from Meg Newberg: Polymer Clay Paradox Cane Tutorial in December 2018. There have been many variations made, and it’s a pattern you can find in Op-art. This variation here is mine, combining a basic spliced cane with the construction of the paradox cane.

There are multiple ways to make this cane “yours” and I note them along the way, but here’s a summary:

At the end I have a small gallery of various ways of doing a paradox cane, varying how the blends are done and how it’s constructed.

This is not a tutorial for complete beginners, as I am not explaining how to do basics like skinner blends and jellyroll canes, but there are many videos on YouTube explaining these basics, so don’t hesitate to check them out.

Pick two sets of colors that go well together, but where the whole set contrasts well. I went with a blue and a green (and dulled versions of both colors) and orange and yellow (I wanted them bright so used the base kato colors for those.) If you use Kato and want to replicate my colors exactly, I used my recipes for Antwerp Blue and Cossack Green.

Technically you could have the third color be black instead of white, but I’d recommend white. At a small scale, black can really darken the pattern if you aren’t careful, and it’s easy for everything to look duller than you intend.

If you’re just wanting to experiment, I wouldn’t use more than ~15g of each color. When I made this set of canes I actually used 60g of each color and then split each blend in half since I was making two canes, so you’ll see a lot more clay in my blends below than is strictly necessary.

You could do this with just two colors and a straight half-and-half blend, but I wanted a bit more complexity for when I was using my canes to make bowls where you can see more details of the canes. I used about the same amount of each color and arranged them as shown here in the picture.

Absolute precision isn’t required, but don’t be too far off or the blend may not be as smooth as you want.

I chose to have some solid on both ends (about half an each on each end, out of a 6.5 inch wide blend) since you can always trim it off at the end if you don’t want that much of the two end colors.

You don’t actually need two of each, I just did that to be able to make both color arrangements of the cane to be able to show what both look like.

While perfect precision isn’t important here (and in fact, some variation adds to the organic effect) I still like to use guides.

First I slightly flatten the jellyroll to make it a bit easier to score the top and bottom consistently with the blunt side of my blade. Then I connect those two indentations along the sides to create a guide for where I want my blade to go.

To cut following the guides, rock your blade back and forth so you can watch each side one at a time and not get too far off course.

When you’re done, you will have cut each jellyroll into four pieces, and one of the pieces in half in one of the jellyrolls. One jellyroll will be in four pieces and the other in five. The one you cut into five pieces (three quarter-pieces and two eight-pieces) will go on the outside of your cane.

In my picture below I have twice as many canes because I made both combinations. I chose to pick a different color to cut in half for each cane. I’ll explain why later.

I wanted a bit more painterly look, with the colors bleeding around a bit more, so adjusted each individual jellyroll piece slightly by pulling the dark outside up towards the white.

You can choose to skip this, or pull it up higher if you want even more contrast deeper into the middle of the cane.

Assemble the pieces and reduce

Arrange your pieces alternating by color, putting the two smallest pieces on the outsides of the cane. If you are only making one version of this cane you will only have one of the two made.

The more the pieces overlap the more intermingling of colors there will be at the end. The less they overlap, the more the middle of the cane will just be white/pastels. Both are nice, it’s just which you prefer. I chose more overlap since I wanted the colors intermingled.

Then reduce it down to approximately a square. Precision isn’t critical here.

You don’t want the cane especially long here though — as you can see measuring against my fingers, as I shortened it on the long side I made it longer on the short side. The cane’s depth didn’t change much at all, to make the next few steps easier.

One mistake I made here that made future steps tougher is I didn’t do a good job of really combining the top and bottom of the cane where the jellyroll pieces of the same color come together. Later when I tried to turn it into a paradox cane those end bumps kept coming apart and breaking. I’d recommend spending the time to really combine the top and bottom along the depth of the cane and make them as smooth as you can.

You also have an option here to cut it in half, put the two side by side, and transform it into a square again. This will give you more pointy bits and more detail in the final cane. I didn’t do that because at the small size of a pen, I felt it would make the design too muddy. But it’s something to consider if you’re using this cane for something larger like jewelry, a bowl, or covering something.

Next you want to take your cane into a triangle — and here’s where I made a small mistake. My intent had been that the major central color would be the one that had those little eight-pieces, so that where it met in the middle you’d have a mirror of that major color rather than a gap. But I reduced the wrong side of the triangle.

Ultimately I’m not sure it was that big a deal, but I wanted to note it in case you prefer to try what I’d originally intended. In that case, where you see me squeezing the orange (which in this cane was the jellyroll in four pieces) you would want to reduce the blue (the one in five pieces.)

A critical note on the transformation: you want to squeeze from the center rather than just the end, and carefully work it into a triangle. If you just squeeze the end together, your outer two pieces will come together and the middle ones will end towards the middle rather than coming to a point along with the outer pieces. If you like that look, great, do it! But I preferred to have all the pieces coming together as much as possible.

The cane will grow a bit in length here, I just kept pushing it back. The other thing you want to do is widen the side you aren’t squeezing together, as you’ll need to pull it up in the next step.. It’s okay if your triangle isn’t shaped exactly like mine, there’s still a lot of reshaping to go.

This is the second-hardest step.

You want to carefully and as evenly as possible thin out one end of the triangle and curl it over. To get the best effect, you want to get all the clay moving, not just the very tip, so it all curls up and around. So similar to before, you can see me putting pressure nearer the middle of the cane with my thumb rather than just the tip of the cane.

You also really want it to curl around — even more than I did here (remember what I said above about not smoothing that blue edge enough? It was causing problems in this step so I didn’t get it curled over enough.)

It helps to have a barrel of some sort to curl it around — I used an unfinished pen tube but you could use anything.

It will make your next few steps easier if you crisp the edges of the cane — even more than I did. Pinch in all three corners.

You can see in the last picture the breaking I spoke about a few times earlier in the dark blue back of the cane on the right. Avoid that by fixing it when you are squaring the original cane, it really helps a lot later!

If you are working with Kato I specifically recommend not letting the cane rest before the next step — more pliable helps a lot. These cane shapes aren’t quite right, and you’ll end up wanting to reshape them a bit when you try to assemble.

This is the hardest step and I suspect where folks tend to get stuck on this cane. I’ll do my best, but a lot of it is just practice, and having your cane shapes right (having a good ‘J’ shape, not having the backs break, and paying attention to my pictures below will help.)

If you haven’t done it before, consider buying Meg’s tutorial, Polymer Clay Paradox Cane Tutorial, for more help on the final construction of the cane.

And as noted in the step above, if you are working with Kato I specifically recommend not letting the cane rest before this next step — Having it be more pliable helps a lot.

The first picture and second pictures show the idea of how the pieces go together — but the second you try to add a third, it’s hard to see how it will ever close into a triangle (see the third picture.)

In the first picture below you can see how the orange and blue both come to each point in the triangle.

And Finally, it’s never going to look perfectly. And that’s okay, because with this cane much of the magic happens between the slices when you tile them. Here’s the quick test I did with a pair of mirrors to show how each cane kaleidoscopes.

While you spend so much attention during assembly on that swirling middle, those details become background and just a swirl of color supporting the main pattern.

This basic construction method can be used to produce a variety of different effects depending on whether you use one color, two colors, mirror your blend, etc. Here are some more examples of work I’ve done.