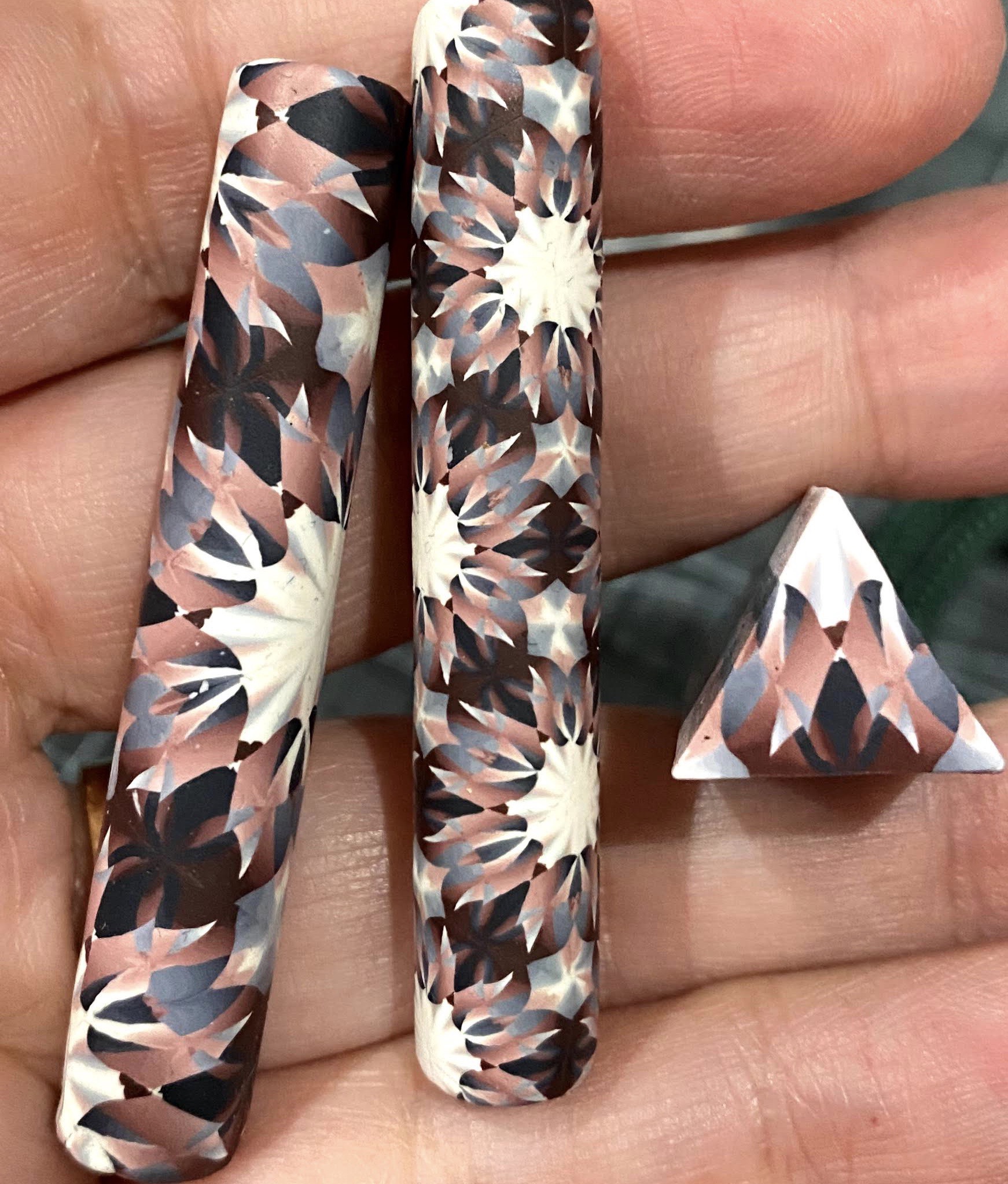 It’s a simple tutorial, and I would encourage you to not try to make yours exactly the same as mine — if you want to make different cuts or colors or flip some pieces differently, you should. Learning how the choices you make affect your final cane is a key part of the process.

Here’s how the final cane looks used on pens at different sizes and parts of the process.

I was fairly sloppy in this cane. As you can see in steps 1 & 2, the edges aren’t lined up and I didn’t take a lot of care forming the plugs. It works out okay because I never try to combine everything into one big hexagon and slice pieces from it, so I don’t have to worry about one end of the cane being different from the other, but it could cause an issue if that’s how you do your canes.

In retrospect, I ended up with too many large blocks of white (those two pure white corners) in the final design. If I were doing this again, I would either do more cuts to the original square or, more likely, simply change how I make my triangle from it. Specifically:

If you are trying to make a cane identical to mine, I made about 10g of the red, and about 7.5g of the grey, and the recipes are linked here.

I did a straight skinner blend with the same amount of white as each color, but offset on both sides so you have pure white on one end and pure color on the other.

Step 2: Put them together in a block, with the light next to their dark and vice versa.

Why? The point of all of these flips and slices is to mix up both color and tone (how dark or light the color is due to black or white being mixed in) to create contrast in the final cane. Without that contrast, the final cane will be muddy, particularly when reduced small enough to be used in a pen.

Step 4: Repeat slicing across the other diagonal, and again flip one side before rejoining.

Step 5: Slice off all four corners

Step 6: Swap corners around. I moved every corner one step clockwise and flipped only one of them: the one that starts in the bottom left of Step 4 and is in the top left corner on step 5.

I flipped it to bring opposite colors together.

Step 7: Slice across asymmetrically and flip one piece before bringing them back together.

Step 8: Begin to turn it into a triangle.

I did this by gently squeezing the bottom left into a corner and flattening the top right.

Step 9: Reduce your cane to about two inches long, and then slice it down the middle.

Figure out how you want to combine it to make your final cane that you’ll re-shape into a triangle.

Step 10: Reshape your combined cane into an equilateral triangle and reduce as needed.

I’d like to extend thanks to both Meg Newberg (via her Cane Builder subscription) and Fiona Abel-Smith, who both have done canes in the below style and were the first introductions I had to this style of creating a kaleidoscope from a skinner blend plug.