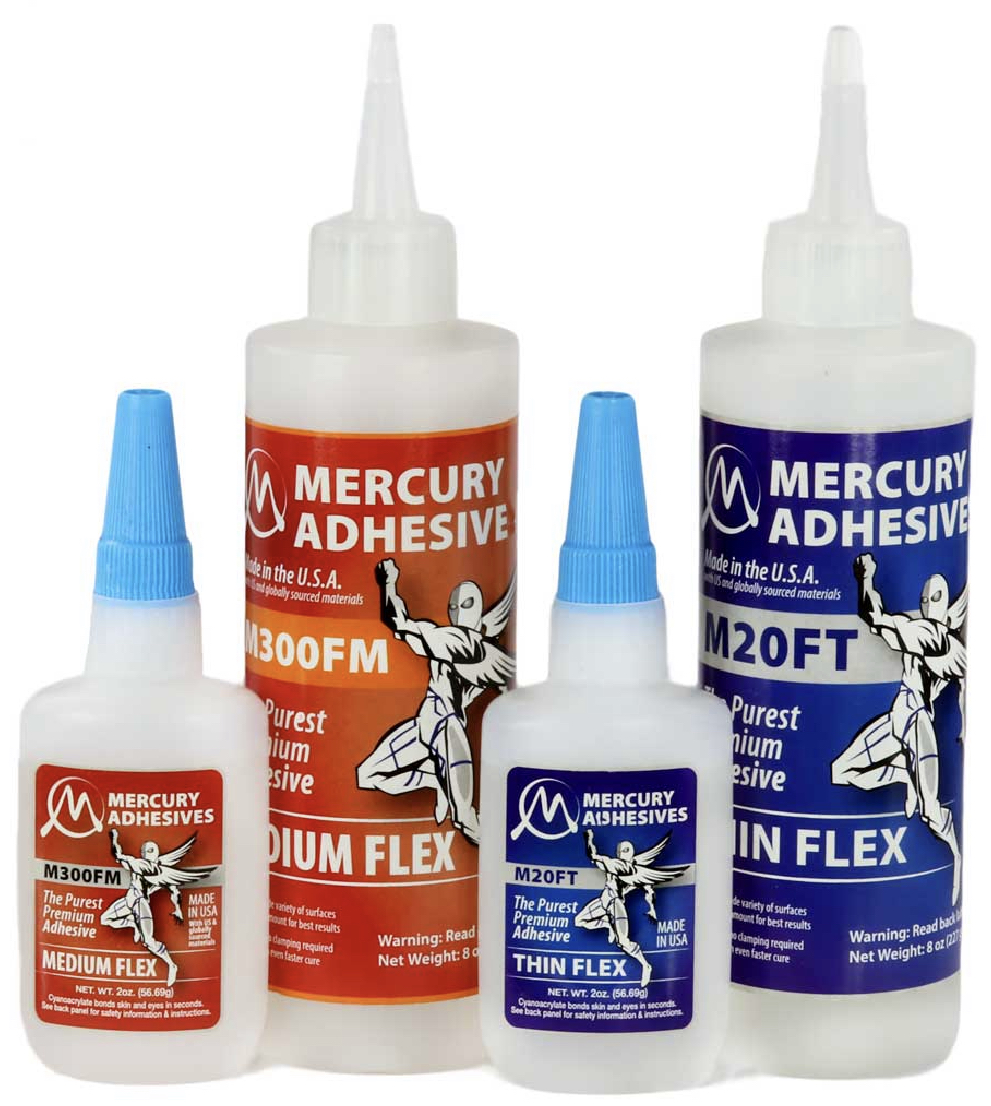 Previously my recommendation was BSI odorless, because it was working sufficiently well for me, and I appreciated the “odorless” aspect, even though the same personal protective equipment is still recommended, because it reduced the chance of problems.

Recently however I got a chance to try Mercury flex, and I am now a committed Mercury fan.

Caveat: this is not a perfect comparison: technically I should compare the BSI odorless to mercury odorless, and BSI flex to mercury flex. But I don’t have the time or money to do that right now, so I’ll report on what I’ve seen so far and write more if I get a chance to do more comparisons in the future.

This CA glue works great for sure. I got good results with it, appreciated the low-odor aspects, and it comes highly recommended by experienced pen-makers like Toni Street.

But even with my technique improving in other ways, I was still having a lot of issues with bumpy CA application that I wasn’t able to get past. I suspect this is in part because I am working somewhat slapdash out of my art studio, rather than in a proper shop: stuff is clamped to the edge of my craft table and for a long time I was using just a hand drill with a mandrel attached to it.

I also found I just wasn’t comfortable without using a respirator: after doing more than one pen in a row I could feel some tightness in my chest, as it’s hard to perfectly ventilate a craft room, and I didn’t want to risk long-term health issues. So I wasn’t getting as much of a benefit off odorless as I hoped.

One nice thing about Super-Gold is that it does dry pretty fast, which BSI notes is one of the features — but I believe it was also part of my problem, along with the technique I’d come up with for applying it in my make-shift setup: I was spraying the barrel with accelerator, which was helpful, but also meant some of it hardened instantly on application, making bumps more likely.

I changed my technique to use accelerator afterwards and it was smoother, but I was still getting more bumps then I liked, and my sanding time was long as a result (and sometimes I’d have to go back and re-apply CA because I’d had to sand so far to get rid of a bump that I went right down to the clay and had to start over again.)

When discussing my lumps and bumps, a friend encouraged I try Mercury flex — it’s not odorless, but it’s thin, and also had a great track record when working on polymer clay pens.

I’ve found that the slower cure time is making it much easier to smooth everything and reduced my CA sanding time by almost half per pen. It’s a bit more likely, with the thin CA, for it to get thrown off the pen and land on clothes/items around me, but using less each time and reducing the rate of rotation has helped a lot there.

The downside is I am also having a few more issues with the odor: when I do more than one pen in a session, I’ve started to notice a bit of dry eye that may indicate some issues with the odors affecting my eyes also. I bought some goggles with a seal online and it’s reduced the problems there though the combination of the two masks is awkward and affects the seal. (Unfortunately a full-face mask with a respirator, which is the best, is quite expensive.)

I’ve continued to use the accelerator afterwards, and am getting much smoother results with that technique and the Mercury CA.

The one problem I still have is I’m now getting grooves around the pen body, I suspect due to the fact that I’m applying the CA with strips of deli paper, and it’s curving up in as I remove the paper, since they occur in the same spots repeatedly. I am considering switching to cling wrap as a replacement, and will write more if it’s more effective.